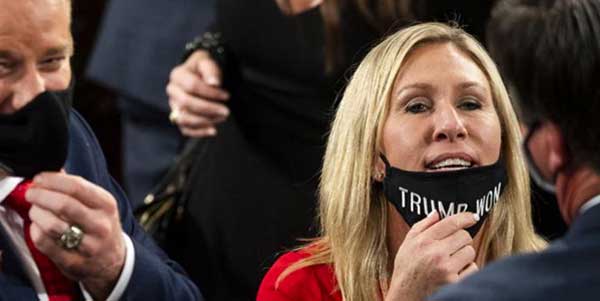 Urge House leadership to schedule a vote on expulsion.

Representative Majorie Taylor Greene is a threat to her colleagues and to vulnerable communities throughout the United States, including American Jews and Muslims.

Even before her incitement which contributed to the deadly insurrection at the Capitol, she endorsed violence against members of Congress on social media and called for the execution of Speaker Pelosi.

She has a long, documented history of support for the antisemitic QAnon conspiracy theory, which has been described as a "rebranded Protocols of the Learned Elders of Zion.”[1] And she’s spread her own antisemitism-laced conspiracies on social media, including a recently unearthed post that blames the Rothchilds for starting forest fires with space lasers.

She’s been even more direct with her anti-Muslim rhetoric, calling the election of two Muslim Americans, “an Islamic invasion into our government.”

Greene’s rhetoric fans the flames of hatred. It has put her colleagues in danger and will put more Americans at risk as long as she remains in a position of power.

The Constitution gives Congress the power to expel any member. House leaders should act as swiftly as possible to expel Greene.*

[1] What You Need To Know About QAnon, SPLC

* Note: the original text of this petition ended with the sentence "And, until such a vote can be taken, Republican leadership must impose immediate consequences by stripping Greene of her committee assignments." This line has been removed due to the passage of a House resolution to remove Greene from committees.